The MECO approach was:

- the identification of impacts

- the choice of indicators of impacts

- the development of management plans for the sites

- the proposal of the management plans to stakeholders

A number of issues were tackled within the MECO project:

- issues of scales: different elements of the system have different scales (e.g. the dunes, the shoreline, the human recreation activities, the birds, the plants, the burrowing animals, etc.); beaches are open systems, influenced by marine and inland factors;

- issues of integration: between disciplines (socioeconomy, geography, biology), between scientists and environmental managers, between the international teams;

- issues of communication: a MECO manual (2002) presented the tecniques and results using a simple scientific language; meetings with stakeholders were held to present the results and propose the management plans developed by the project.

At the end of the project a Manual was produced where the Partners described the results obtained and the methodologies developed in the framework of the MECO project.

A lesson learnt: beaches are open systems and should be studied and managed as open systems.

- the identification of links between compartments and development of evolutive scenarios

- the proposal of the strategies and criteria developed to managers and planners.

The following issues were addressed within the MEDCORE project and strategies were developed to resolve the issues:

- issues of scales: MEDCORE focused on coastal environments and the influencing zones from river catchment to the sea - the limits of the areas were defined functionally - ideally, the whole Mediterranean basin was the spatial scale of MEDCORE;

- issues of integration: MEDCORE aimed at linking elements and compartments and adopted an interdisciplinary integrative approach;

By taking advantage of the good and bad experience gained from the previous projects, WADI chose the following strategy:

- the temporal dimension has gone beyond the time lapse of the project, taking advantage from past knowledge - in the short, medium and long term

A lesson learnt: impacts are trends of loss of sustainability Þ understanding the present and the past to forecast and help the future. 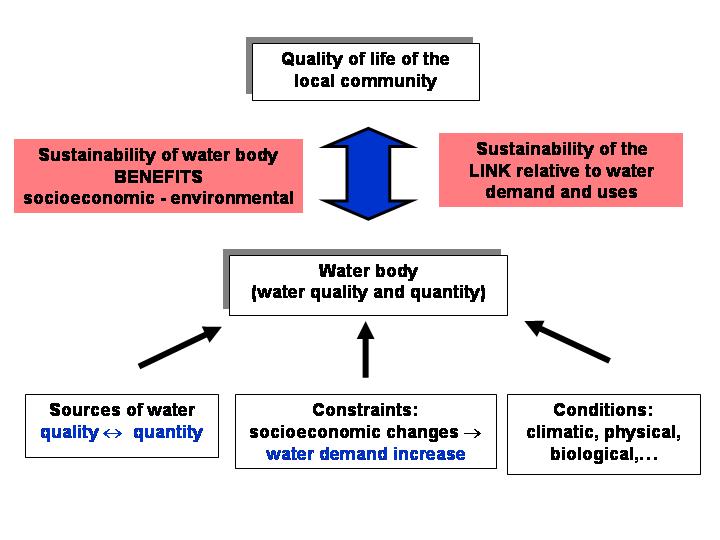 In synthesis the WADI approach was:

- Selecting the most appropriate management plans

Who were the stakeholders ?

WADI participants chose a number of study sites across the Mediterranean coastal areas, in Spain, Italy, Morocco, Tunisia and Egypt, and identified the stakeholders for water issues at each site.

WADI payed a special attention to the weak stakeholders, who are often not officially represented: women and children. We wanted to listen and focus to their problems.

WADI took into account the rights of the natural environment for the benefit of everybody, included the future generations.